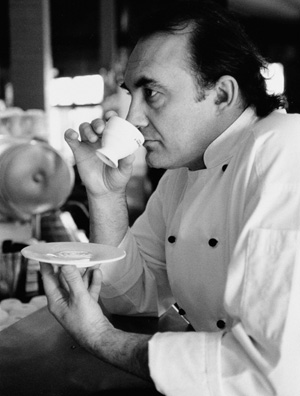 “I am Italian. And I am a cook. But I live in Australia and whenever I can, I seek out and use only the finest and freshest Australian ingredients.” Fresh From Italy, 1993.

Stefano Manfredi is known fondly in Australia as the ‘godfather’ of modern Italian cuisine. He has made his mark as chef, restaurateur, an inspired coffee blender, successful cookbook and food writer , an Italian  Wine and Food  educator and an ambassador of  seasonality and sustainability.

Born in the Lombardy region of northern Italy, he settled in Australia with his family in 1961. In 1983, he opened The Restaurant in an impossible to find back laneway in Ultimo – later to be renamed The Restaurant Manfredi. In 1996 he moved his operations to the Rocks with the creation of the much-applauded Bel Mondo (1996 – 2002). With the simple philosophy ‘the flavours of Italy from the fresh produce of Australia’ both restaurants transformed the way Italian cuisine and fine dining were perceived in Australia. Restaurant Manfredi remains the only Italian restaurant to have attained the coveted 3-hat rating from The Sydney Morning Herald Good Food Guide.

In 2000, Manfredi began a collaboration with renowned coffee roaster Wayne Archer from D.E Master Blenders 1753, one of the world’s leading coffee producers. Manfredi had identified a niche in the local coffee market for a premium cafe blend. Together Manfredi and Archer created Espresso di Manfredi, a brand built on Stefano’s personal passion for coffee, his masterful palette and his search for the perfect coffee blend. In 2013 the original Espresso di Manfredi blend, Classico has been complemented by two new blends Chiara and Audacia.

Manfredi has won numerous accolades in both Australia and overseas, most notably he was presented the Italian International Culinary Institute for Foreigners inaugural trophy in 2002 by then Prime Minister Silvio Berlusconi. The trophy acknowledged his inclusion as one of Italy’s internationally celebrated chefs in the first English translation of cooking tome, ‘The Silver Spoon’ and was awarded for, his success with both the critics and the public alike.

In 2007, inspired by its coastal and rural setting, Stefano took the helm at Bells at Killcare and its restaurant Manfredi at Bells. Here he has overseen the planting of extensive kitchen gardens to inspire a more pastoral rendition of his cuisine which saw the restaurant honoured with the Good Living Sustainability Award at the The 2012 Sydney Morning Herald Good Food Guide Awards.

In addition to his commitment at Bells, in 2011 Manfredi opened signature restaurant Osteria Balla Manfredi at The Star, heralding a much-anticipated return to the Sydney dining scene and offering modern Milanese cuisine in an Italian trattoria style setting. Just seven months after opening, CONDÉ NAST TRAVELER nominated in its Best New Restaurants of 2012: Hot Tables list.

Throughout his career, Stefano has also written frequently on food and cooking, publishing numerous  books  of significance ,  presented  master classes, made local and international television appearances, hosted cooking  and wine tours in Italy and remained a passionate  Food and Wine Educator , teacher and advocate for local, sustainable and seasonal produce.