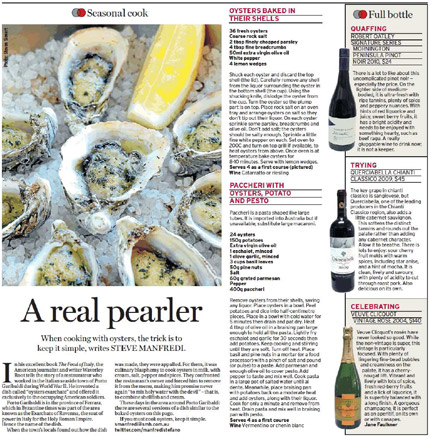 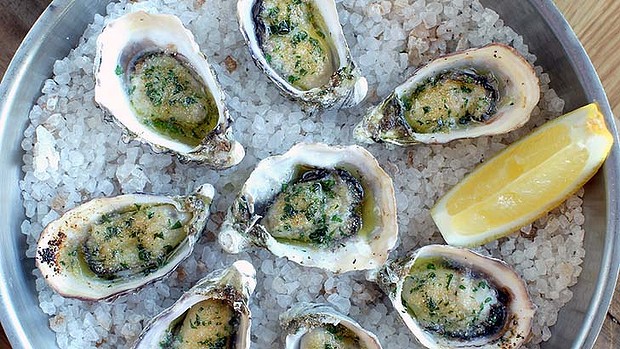 In his excellent book The Food of Italy, the American journalist and writer Waverley Root tells the story of a restaurateur who worked in the Italian seaside town of Porto Garibaldi during World War II. He invented a dish called ”oysters exarchate” and offered it exclusively to the occupying American soldiers.

Porto Garibaldi is in the province of Ferrara, which in Byzantine times was part of the area known as the Exarchate of Ravenna, the seat of power in Italy for the Holy Roman Empire. Hence the name of the dish.

“If you must cook oysters, keep it simple.”

When the town’s locals found out how the dish was made, they were appalled. For them, it was culinary blasphemy to cook oysters in milk, with cream, salt, pepper and spices. They confronted the restaurant’s owner and forced him to remove it from the menu, making him promise never again ”to mix holy water with the devil” – that is, to combine shellfish and cream.

These days in the area around Porto Garibaldi there are several versions of a dish similar to the baked oysters on this page.

If you must cook oysters, keep it simple.

OYSTERS BAKED IN THEIR SHELLS

Shuck each oyster and discard the top shell (the lid). Carefully remove any shell from the liquor surrounding the oyster in the bottom shell (the cup). Using the shucking knife, dislodge the oyster from the cup. Turn the oyster so the plump part is on top. Place rock salt on an oven tray and arrange oysters on salt so they don’t tip out their liquor. On each oyster sprinkle some parsley, breadcrumbs and olive oil. Don’t add salt; the oysters should be salty enough. Sprinkle a little fine white pepper on each. Set oven to 200C and turn on top grill if available, to heat oysters from above. Once oven is at temperature bake oysters for 8-10 minutes. Serve with lemon wedges.

Serves 4 as a first course
Wine Catarratto or riesling

PACCHERI WITH OYSTERS, POTATO AND PESTO

Paccheri is a pasta shaped like large tubes. It is imported into Australia but if unavailable, substitute large macaroni.

Remove oysters from their shells, saving any liquor. Place oysters in a bowl. Peel potatoes and dice into half-centimetre pieces. Place in a bowl with cold water for 5 minutes then drain and pat dry. Heat 4 tbsp of olive oil in a braising pan large enough to hold all the pasta. Lightly fry eschalot and garlic for 30 seconds then add potatoes. Keep cooking and stirring until they are soft. Turn off heat. Place basil and pine nuts in a mortar (or a food processor) with a pinch of salt and pound (or pulse) to a paste. Add parmesan and enough olive oil to cover pesto. Add pepper to taste and mix well. Cook pasta in a large pot of salted water until al dente. Meanwhile, place braising pan with potatoes back on a moderate heat and add oysters, along with their liquor. Cook for only a minute and remove from heat. Drain pasta and mix well in braising pan with pesto.

Serves 4 as a first course
Wine Vermentino or chenin blanc