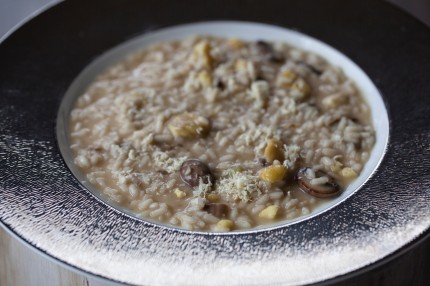 This risotto from Manfredi is a modern interpretation of a milanese classic. Stefano Manfredi came to Australia from his birthplace in Lombardy in the north of Italy as a small child. He learnt to cook at his mother Franca’s knee, herself an acclaimed cook . In 1983 he opened his first restaurant in Sydney, which went on to be the inaugural, and so far the only Italian restaurant to gain the acclaimed 3 hats from the Sydney Morning Herald Good Food Guide. It was during this definitive decade that customers had their first taste of Risotto presented as gastronomy as they were first introduced to the cuisine of northern Italy, interpreted by Manfredi through the use of the freshest seasonal Australian ingredients.

In a wide pan heat the 50g of butter, add the onion and lightly fry until transparent- do not let it colour. Add the rice and stir until the grains become transparent- about a minute. Add the wine and keep cooking until it has completely evaporated. Add a ladle or two of boiling stock to cover the rice, add the porcini and simmer and stir until the liquid is almost entirely incorporated. Add the chestnuts, a couple of pinches of salt and keep adding the boiling stock a little at a time till almost cooked – about 20 minutes, depending how ‘al dente’ you like it. Remove from heat and stir in the butter and Parmesan adding a little salt to adjust seasoning. Rest for 3-4 minutes with lid on before serving with a bowl of grated Parmesan on the table for guests to add if they like. Serves 6-8.