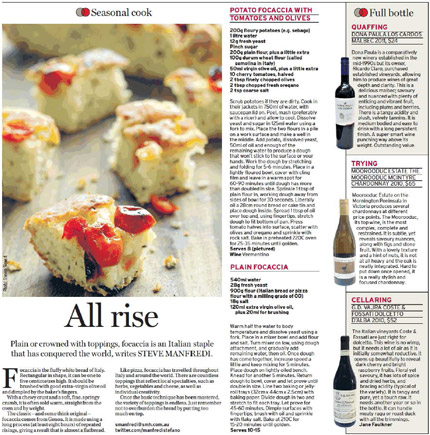 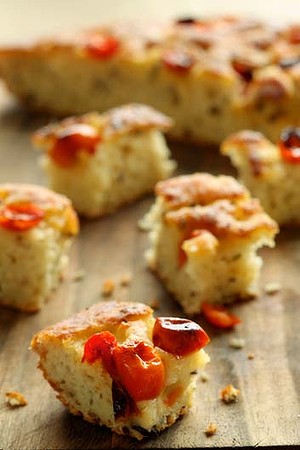 Focaccia is the fluffy white bread of Italy. Rectangular in shape, it can be one to five centimetres high. It should be brushed with good extra-virgin olive oil and dimpled by the baker’s fingers.

With a chewy crust and a soft, fine, springy crumb, it is often sold warm, straight from the oven and by weight.

The classic – and some think original – focaccia comes from Genoa. It is made using a long process (at least eight hours) of repeated risings, giving a result that is almost a flatbread.

Like pizza, focaccia has travelled throughout Italy and around the world. There are countless toppings that reflect local specialties, such as herbs, vegetables and cheese, as well as individual creativity.

Once the basic technique has been mastered, the variety of toppings is endless. Just remember not to overburden the bread by putting too much on top.

POTATO FOCACCIA WITH TOMATOES AND OLIVES

Scrub potatoes if they are dirty. Cook in their jackets in 750ml of water, with saucepan lid on. Peel, mash (preferably with a ricer) and allow to cool. Dissolve yeast and sugar in 125ml water using a fork to mix. Place the two flours in a pile on a work surface and make a well in the middle. Add potato, dissolved yeast, 50ml of oil and enough of the remaining water to produce a dough that won’t stick to the surface or your hands. Work the dough by stretching and folding for 5-6 minutes. Place in a lightly floured bowl, cover with cling film and leave in a warm spot for 60-90 minutes until dough has more than doubled in size. Sprinkle 1 tbsp of plain flour in, working dough away from sides of bowl for 30 seconds. Liberally oil a 28cm round bread or cake tin and place dough inside. Spread 1 tbsp of oil over top and, using fingertips, stretch dough to fit bottom of pan. Press tomato halves into surface, scatter with olives and oregano and sprinkle with rock salt. Bake in preheated 220C oven for 25-35 minutes until golden.

Warm half the water to body temperature and dissolve yeast using a fork. Place in a mixer bowl and add flour and salt. Turn mixer on low, using dough attachment, and gradually add remaining water, then oil. Once dough has come together, increase speed a little and keep mixing for 5 minutes. Place dough on lightly oiled bench. Knead for another 5 minutes. Return dough to bowl, cover and let prove until double in size. Line two baking or jelly-roll trays (32cm x 44cm x 2.5cm) with baking paper. Divide dough in two and stretch to fit each tray. Let prove for 45-60 minutes. Dimple surfaces with fingertips, brush with oil and sprinkle with flaky salt. Bake at 210C for 15-20 minutes until golden.