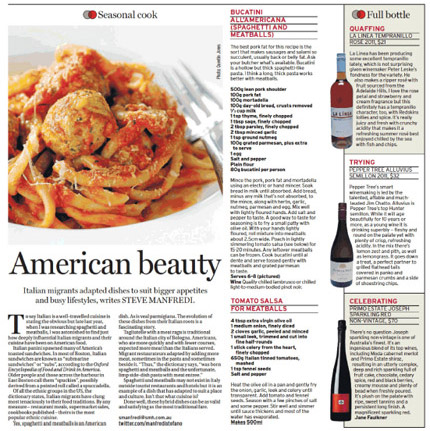 To say that Italian is a well-travelled cuisine is really stating the obvious but late last year, when I was researching spaghetti and meatballs, I was astonished to find just how deeply influential Italian migrants and their cuisine have been on American food.

Italian panini spawned many of America’s “pressed sandwiches” because they were so convenient. According to The Oxford Encyclopaedia of Food and Drink in America (OEFDA), “Italian sandwiches are known as “submarine sandwiches” or “subs” in most of Boston, but as “spuckies” (possibly from a pointed roll called a “spuccatella”) among older people and across the harbor in East Boston.”

The OEFDA goes on to say “Among the six largest ethnic groups in modern America, Italian migrants have retained most of their traditional foodways and have the most popular ethnic cuisine by any measure: restaurant meals, supermarket sales, published cookbooks, and recipes in contributed cookbooks.”

Yes, spaghetti and meatballs is an American dish, as is veal parmigiana. How it evolved is fascinating. Tagliatelle with a meat ragù is traditional around the Italian city of Bologna but a portion has only a little meat. Americans expected a lot more meat, and they ate more quickly with fewer courses.

Again the OEFDA, “Italian American restaurants adapted by putting the meat course into or next to the pasta course, with a salad on the side. Thus was born spaghetti and meatballs, and the unfortunate, limp side-dish pasta with meat entrée.”

Now, if you think I’m implying that spaghetti and meatballs is less than authentic or worthwhile then perhaps I need to finish by saying that, while it may not exist in Italy outside of tourist restaurants and hotels, it is an example of a dish that has been adapted from certain influences to suit a place and culture. Isn’t that what cuisine is? And if done well is as valid and satisfying as any.

The pork fat called for is the sort that goes into making sausages and salami so succulent. Ask your butcher. Bucatini are thick spaghetti with a hole in the middle. I think a thicker gauge long pasta works better with the meatballs.

Mince together pork, pork fat and mortadella using a hand or electric mincer. Soak bread in milk until absorbed. Add bread, minus any milk that’s not absorbed, to mince along with all other ingredients. Mix well with your hands taking care to incorporate all ingredients. Add salt and pepper to taste. A good way to taste for seasoning is to fry a small patty made from mixture in a pan with olive oil. Adjust if necessary. Roll into meatballs the diameter of a 20c piece, lightly flouring hands so they don’t stick. Once all meatballs are ready, poach them in lightly simmering tomato sauce for 15-20 minutes. Any leftover meatballs can be frozen tightly sealed on a tray. Cook the bucatini to “al dente” and serve tossed gently with the meatballs and grated parmesan to taste. Makes enough meatballs for 6-8.

Heat olive oil in a pan and gently fry onion, garlic, leek and celery until transparent. Add tomato and fennel seed. Season with a couple of pinches of salt and some pepper. Stir well and simmer until sauce thickens and most of the water has evaporated. Makes 500ml.