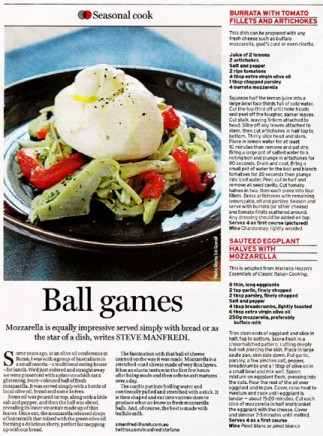 Mozzarella is equally impressive served simply with bread or as the star of a dish, writes STEVE MANFREDI.

Some years ago, at an olive oil conference in Rome, I was with a group of Australians in a small osteria – a traditional eating house – for lunch. We’d just ordered and straight away we were presented with a plate on which sat a glistening, ivory-coloured ball of fresh mozzarella. It was served simply with a bottle of local olive oil, bread and some knives.
Some oil was poured on top, along with a little salt and pepper, and then the ball was sliced, revealing its inner structure made up of thin leaves. Once cut, the mozzarella released drops of buttermilk that mixed with the green olive oil forming a delicious slurry, perfect for mopping up with our bread.

The fascination with that ball of cheese centred on the way it was made. Mozzarella is a stretched-curd cheese made of very thin layers. It has an elastic texture in the first few hours after being made and then softens as it matures over a day.

The curd is put into boiling water and continually pulled and stretched with a stick. It is then shaped and cut into various sizes to produce what we know as fresh mozzarella balls. And, of course, the best is made with buffalo milk.

This is adapted from Marcella Hazan’s Essentials of Classic Italian Cooking.

Trim stem ends of eggplant and slice in half, top to bottom. Score flesh in a cross-hatched pattern, cutting deeply but not piercing the skin. Place in large saute pan, skin side down. Put garlic, parsley, a few pinches salt, pepper, breadcrumbs and a 1 tbsp of olive oil in a small bowl and mix well. Spoon mixture on eggplant flesh, pressing into the cuts. Pour the rest of the oil over eggplant and in pan. Cover, raise heat to medium and cook until eggplant is tender – about 15-20 minutes. Cut each slice of mozzarella in half and blanket the eggplant with the cheese. Cover and simmer 2-3 minutes until melted.

Serves 4 as a first course

BURRATA WITH TOMATO FILLETS AND ARTICHOKES

This dish can be prepared with any fresh cheese such as buffalo mozzarella, goat’s curd or even ricotta.

Squeeze half the lemon juice into a large bowl two-thirds full of cold water. Cut the top third off artichoke heads and peel off the tougher, darker leaves. Cut stalk, leaving 5-6cm attached to head. Slice off any leaves attached to stem, then cut artichokes in half top to bottom. Thinly slice head and stem. Place in lemon water for at least 10 minutes then remove and pat dry. Bring a large pot of salted water to a rolling boil and plunge in artichokes for 90 seconds. Drain and cool. Bring a small pot of water to the boil and blanch tomatoes for 20 seconds then plunge into iced water. Peel, cut in half and remove all seed cavity. Cut tomato halves in two, then each piece into four fillets. Dress artichokes with remaining lemon juice, oil and parsley. Season and serve with burrata (or other cheese) and tomato fillets scattered around. Any dressing should be added on top.