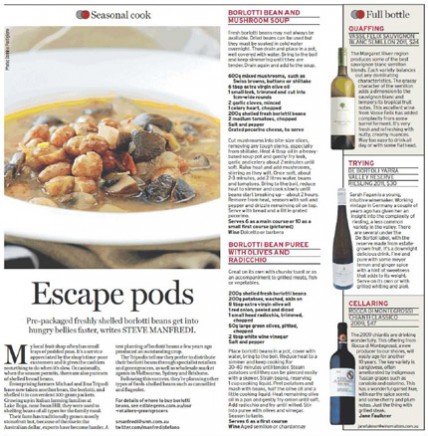 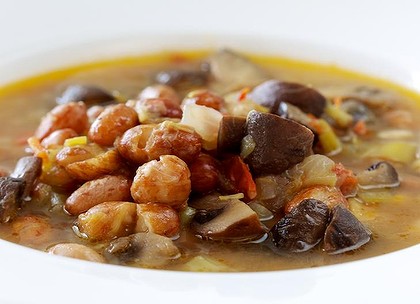 My local fruit shop often has small trays of podded peas. It’s a service appreciated by the shop’s time-poor customers and it gives the cashiers something to do when it’s slow. Occasionally, when the season permits, there are also punnets of shelled broad beans.

Enterprising farmers Michael and Jina Tripodi have now taken another bean, the borlotti, and shelled it in convenient 300-gram packets. Growing up in Italian farming families at Lake Boga, near Swan Hill, they were used to shelling beans of all types for the family meal.

Their farm has traditionally grown mostly stonefruit but, because of the rise in the Australian dollar, exports have become harder. A test planting of borlotti beans a few years ago produced an outstanding crop.

The Tripodis tell me they prefer to distribute their borlotti beans through specialist retailers and greengrocers, as well as wholesale market agents in Melbourne, Sydney and Brisbane.

Following this success, they’re planning other types of fresh-shelled beans such as cannellini and flageolet.

For details of where to buy borlotti beans, see ediblegems.com.au/our-retailers-greengrocers

Fresh borlotti beans may not always be available. Dried beans can be used but they must be soaked in cold water overnight. Then drain and place in a pot, well covered with water. Bring to the boil and keep simmering until they are tender. Drain again and add to the soup.

Cut mushrooms into bite-size slices, removing any tough stems, especially from shiitake. Heat 4 tbsp oil in a heavy-based soup pot and gently fry leek, garlic and celery about 2 minutes until soft. Raise heat and add mushrooms, stirring as they wilt. Once soft, about 2-3 minutes, add 2 litres water, beans and tomatoes. Bring to the boil, reduce heat to simmer and cook slowly until beans start breaking up – about 2 hours. Remove from heat, season with salt and pepper and drizzle remaining oil on top. Serve with bread and a little grated pecorino.

Great on its own with chunky toast or as an accompaniment to grilled meats, fish or vegetables.

Place borlotti beans in a pot, cover with water, bring to the boil. Reduce heat to a simmer and keep cooking for 30-40 minutes until tender. Steam potatoes until they can be pierced easily with a skewer. Strain beans, reserving 1 cup cooking liquid. Peel potatoes and mash with beans, half the olive oil and a little cooking liquid. Heat remaining olive oil in a pan and gently fry onion until soft. Add radicchio and fry until wilted. Stir into puree with olives and vinegar. Season to taste.

Serves 6 as a first course