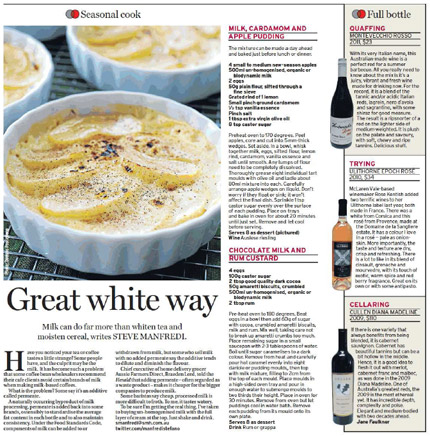 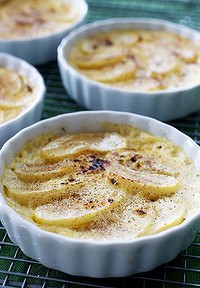 Milk can do far more than whiten tea and moisten cereal.

Have you noticed your tea or coffee tastes a little strange? Some people have, and the culprit may be the milk. It has become such a problem that some coffee bean wholesalers recommend their cafe clients avoid certain brands of milk when making milk-based coffees.

What is the problem? Some say it’s an additive called permeate.

A naturally occurring byproduct of milk processing, permeate is added back into some brands, ostensibly to standardise the average fat content in each bottle and to also maintain consistency. Under the Food Standards Code, components of milk can be added to or withdrawn from milk, but some who sell milk with no added permeate say the additive tends to dilute and diminish the flavour.

Some baristas say cheap, processed milk is more difficult to froth. To me, it tastes watery.

To be sure I’m getting the real thing, I’ve taken to buying un-homogenised milk with the full layer of cream at the top. Just shake and drink.

The mixture can be made a day ahead and baked just before lunch or dinner.

Preheat oven to 170 degrees. Peel apples, core and cut into 5mm-thick wedges. Set aside. In a bowl, whisk together milk, eggs, sifted flour, lemon rind, cardamom, vanilla essence and salt until smooth. Any lumps of flour need to be completely dissolved. Thoroughly grease eight individual tart moulds with olive oil and ladle about 80ml mixture into each. Carefully arrange apple wedges on liquid. Don’t worry if they float or sink; it won’t affect the final dish. Sprinkle 1 tsp castor sugar evenly over the surface of each pudding. Place on trays and bake in oven for about 20 minutes until just set. Remove and let cool before serving.

Pre-heat oven to 180 degrees. Beat eggs in a bowl then add 60g of sugar with cocoa, crumbled amaretti biscuits, milk and rum. Mix well, taking care not to break up amaretti crumbs too much. Place remaining sugar in a small saucepan with 2-3 tablespoons of water. Boil until sugar caramelises to a dark colour. Remove from heat and carefully pour hot caramel evenly into eight dariole or pudding moulds, then top with milk mixture, filling to 2cm from the top of each mould. Place moulds in a high-sided oven tray and pour in enough water to submerge moulds to two thirds their height. Place in oven for 30 minutes. Remove from oven but let puddings cool in water bath. Remove each pudding from its mould onto its own plate.