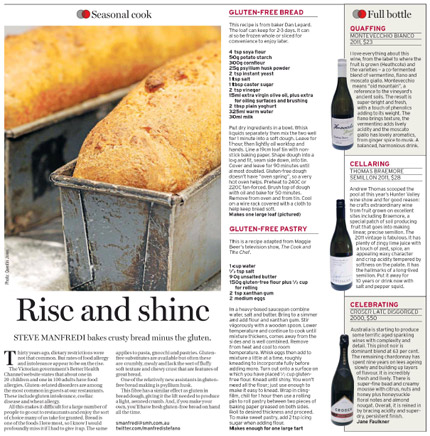 Thirty years ago, dietary restrictions were not that common. But rates of food allergy and intolerance appear to be on the rise.

The Victorian government’s Better Health Channel website states that about one in 20 children and one in 100 adults have food allergies. Gluten-related disorders are among the most common in guests at our restaurants. These include gluten intolerance, coeliac disease and wheat allergy.

All this makes it difficult for a large number of people to go out to restaurants and enjoy the sort of choice many of us take for granted. Bread is one of the foods I love most, so I know I would profoundly miss it if I had to give it up. The same applies to pasta, gnocchi and pastries. Gluten-free substitutes are available but often these are crumbly, mealy and lack the sort of fluffy soft texture and chewy crust that are features of great bread.

One of the relatively new assistants in gluten-free bread making is psyllium husk. This fibre has a similar effect as gluten in bread dough, giving it the lift needed to produce a light, aerated crumb. And, if you make your own, you’ll have fresh gluten-free bread on hand all the time.

This is a recipe adapted from Maggie Beer’s television show, The Cook and The Chef.

In a heavy-based saucepan combine water, salt and butter. Bring to a simmer and add flour and xanthan gum. Stir vigorously with a wooden spoon. Lower temperature and continue to cook until mixture thickens, comes away from the sides and is well combined. Remove from heat and cool to room temperature. Whisk eggs then add to mixture a little at a time, roughly kneading to incorporate fully before adding more. Turn out onto a surface on which you have placed ½ cup gluten-free flour. Knead until shiny. You won’t need all the flour; just use enough to make it easy to knead. Wrap in cling-film, chill for 1 hour then use a rolling pin to roll pastry between two pieces of baking paper greased on both sides. Roll to desired thickness and proceed. To make sweet pastry, add 2 tsp icing sugar when adding flour.

Makes enough for one large tart

This recipe is from baker Dan Lepard. The loaf can keep for 2-3 days. It can also be frozen whole or sliced for convenience to enjoy later.

Put dry ingredients in a bowl. Whisk liquids separately then mix the two well for 1 minute into a soft dough. Leave for 1 hour, then lightly oil worktop and hands. Line a 19cm loaf tin with non-stick baking paper. Shape dough into a log and fit, seam side down, into tin. Cover and leave for 90 minutes until almost doubled. Gluten-free dough doesn’t have ”oven spring”, so a very hot oven helps. Preheat to 240C or 220C fan-forced. Brush top of dough with oil and bake for 50 minutes. Remove from oven and from tin. Cool on a wire rack covered with a cloth to help keep bread soft.