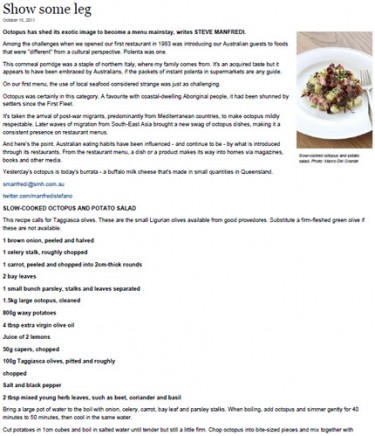 Among the challenges when we opened our first restaurant in 1983 was introducing our Australian guests to foods that were “different” from a cultural perspective. Polenta was one. This cornmeal porridge was a staple of northern Italy, from where my family comes. Granted, it’s an acquired taste but it appears to have been embraced to a large extent if the packets of “instant polenta” in supermarkets can be used as a measure.

Just as challenging was the use on our first menus back then of local seafood that was thought of as strange. Octopus was certainly in this category. Loved by coastal-dwelling aborigines but, on the whole, shunned by the settlers since the First Fleet.

It’s taken the arrival of post-war migrants, predominantly from Mediterranean countries such as Greece, Spain and Italy, to make octopus mildly respectable. With the following migration from South-East Asia, a new swag of octopus dishes arrived giving octopus a consistent presence on restaurant menus.

And here’s the point. Australia has been influenced (and continues to be) in its eating habits by what is introduced through its restaurants. From the restaurant menu a dish or a product makes its way into homes via magazines, books and other media like television and the web.

Yesterday’s octopus is today’s burrata- a buffalo milk cheese that’s made in, as yet, small quantities in Queensland.

This recipe calls for Taggiasca olives. These are the small Ligurian (Italian) olives that are available from good provedores. Substitute a firm-fleshed green olive if these are not available.

Bring to boil a large pot of water with onion, celery, carrot, bay leaf and parsley stalks. When it’s boiling add octopus and simmer gently for 40-50 mins, then let it cool down in the same water. Cut potatoes in 1cm dice and boil in salted water till tender but still a little firm. Chop octopus into bite-sized pieces and mix together with potatoes. Dress with oil, lemon juice, chopped parsley and chopped capers. Add pitted olives, salt and pepper and mix well. Set on serving plates and finish with herb leaves. Serves 6 as a first course.

Place cleaned octopus in a large pot and cover with water to about 10cm over the mollusc. Bring to the boil, and then turn down to a simmer for 40-50 mins. Remove from heat and let it cool down in the same water. Heat oil in a pan and gently fry minced garlic and dried tomatoes for about 10 minutes, continually stirring. Add vinegar and bring to boil until liquid evaporates. Add pureed tomatoes and simmer gently, stirring occasionally, for 60-90 minutes until thick and most of the water has gone. Remove cooled octopus from cooking water and chop into bite-sized pieces. Add to the tomato in the pan and keep simmering for 2-3 minutes more. Add chilli, parsley, salt and pepper to taste. Let it cool for 20 minutes then serve with bread and salad. Serves 6 as a first course.

Wine: Light red such as Rosé or unwooded Pinot Noir.