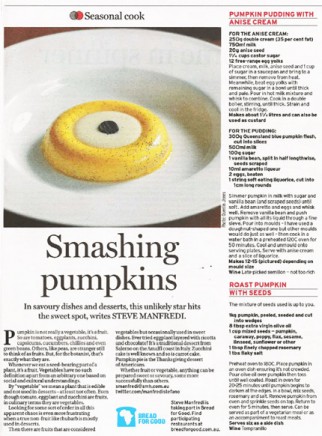 Pumpkin is not really a vegetable it’s a fruit. And so are tomatoes, eggplants, zucchini, capsicum, cucumbers, chilli and even green beans. There are others, stranger still, like peas that are hard to think of as fruits. But, for the botanist, that’s exactly what they are.

A fruit is the ripened ovary, including the seeds, of a flowering plant. Whenever we eat a seed-bearing part of a plant, it’s a fruit.

But vegetables have no such definition apart from an arbitrary one based on social and cultural understandings. By “vegetable” we mean a plant that is edible and not used in desserts- at least not often. Even though, botanically, tomato, eggplant and zucchini are fruits, in culinary terms they are vegetables.

Looking for some sort of order in all this apparent chaos is made even more frustrating when a true non-fruit like rhubarb is mostly used in desserts. Then there are the fruits that are thought of as vegetables but occasionally used in sweet dishes.

Ever had eggplant layered with ricotta and chocolate? It’s a traditional dessert from Salerno on the Amalfi coast. Zucchini cake is well known and so is carrot cake. Pumpkin pie is the Thanksgiving dessert of Americans and is also popular in Canada.

Whether fruit or vegetable, anything can be prepared as sweet or savoury, some more successfully than others.

For the anise cream
Place cream, milk, anise seed and 1 cup of sugar in a saucepan and bring to a simmer, then remove from heat. Meanwhile beat egg yolks with remaining sugar in a bowl until thick and pale. Pour in hot milk mixture and whisk to combine. Cook in a double boiler, stirring, until thick. Strain and cool in the fridge. Makes about 1.5 litres and can also be used as custard.For the pudding
I have used a doughnut-shaped mould but other moulds will do just as well.

Simmer the pumpkin till soft in the milk with sugar and vanilla bean (and the scraped seeds). Add the amaretto and the eggs and whisk well. Remove vanilla bean and push pumpkin with all its liquid through a fine sieve. Put into moulds and cook in a water bath in a preheated 120C oven for 50 minutes. Cool and unmould onto serving plates. Serve with anise cream and a slice of liquorice as per photo. Makes 12-15 depending on size of mould.

ROAST PUMPKIN WITH SEEDS
The mixture of seeds used is up to you.

Preheat oven to 180C. Place pumpkin in an oven dish making sure it’s not crowded. Pour on olive oil and toss so that pumpkin is well coated. Roast in oven for 20-25 minutes until pumpkin begins to darken at the edges. In a bowl mix seeds, rosemary and salt. Remove pumpkin from oven and sprinkle seeds on top. Put back in oven for 5 minutes, and then serve. Can be on its own as part of vegetarian meal or as an accompaniment to roast meats. Serves 6.