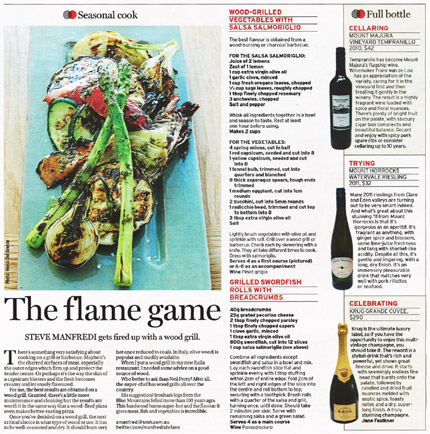 I remember watching a series on television about the American barbecue. Each episode focused on a city and featured their local barbecue traditions. The episode on Texas, the longhorn state, was all about great slabs of t-bones and giant rib eyes with their specialty, the cola marinade. Maine highlighted their excellent shellfish such as lobsters, crabs and bivalves. And so it went.

It occurred to me that nobody’s tackled the obvious, a series on the great Australian barbecue. Of course not everybody uses a setup from Barbecues Galore but that could only add to the story.

Imagine whole suckling pigs and lambs impaled and suspended upright but leaning inwards over a pit full of hot coals. The contraptions holding the whole animals are held fast on the circumference of a large rotating metal band around the central heat source. This is an Argentine barbecue, a parrilla.

There’d be pit barbecues with hot rocks where pigs and goats would be buried and cooked to succulent perfection. There’d be a segment on the merits of various heat sources- one type of wood over another; coal versus wood versus other heat sources.

But barbecues are not just about meat. I’d do a whole episode on alternate barbecues. I’d visit hippies, vegans and vegetarians for their take on the tradition. And there are people who grill all manner of fruit over coals including peaches, figs and persimmons. Some even make bread over a wood grill.

Have your butcher cut 18 pieces of veal fillet and pound each carefully into rough ovals, about 8-9 centimetres across. Heat 1 tablespoon of oil in a pan and gently fry onion and garlic until soft. Add breadcrumbs and toast for 2 minutes constantly stirring so they don’t colour too much. Remove from heat and scrape into a bowl. Add parsley and sage, mix well and let it cool completely before adding provolone and parmesan. Season the mixture to taste with salt and pepper. Spread each pounded slice of veal on a work surface and put a slice of pancetta on. Now place a good tablespoon of breadcrumb stuffing evenly across. Roll each piece tightly and tuck the sides of the meat in toward the end so it’s secure. Impale 3 rolls on each skewer. Rub rolls with remaining olive oil and barbecue. Sprinkle with salt and serve with the sweet and sour zucchini and eggplant. Serves 6.

This dish can be made with different vegetables, as long as they’re thinly sliced.

Top and tail zucchini and slice each thinly, about 2-3mm, lengthways. Prepare eggplant in the same manner. Lay slices on a tray and brush both sides generously with the olive oil. Salt and pepper each side and then barbecue, turning once, until tender. Place barbecued vegetable slices on a tray (or two) so that they’re in one layer. Place sugar and vinegar in a pot over medium heat and stir until all the sugar has dissolved. Throw mint into pot, remove from heat and pour over vegetables. Let them cool, drain and serve with the veal rolls or as a first course tossed with your favourite salad leaves and dressed with a little more olive oil.