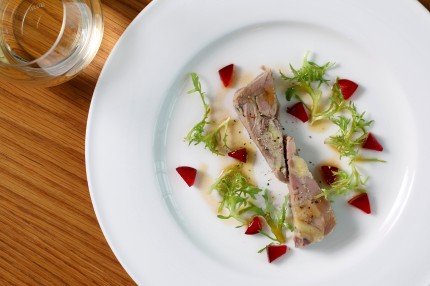 Over the past ten years, Stefano has followed his love affair of Italian food and wine through the country’s regions, tasting first-hand the delicious offerings of Southern Europe. For the first night of the 2014 Regional Dinner Series, Stefano begun with a menu inspired by Valle d’Aosta, the smallest region in the north-western mountains of Italy, bordering France and Switzerland

Valle d’Aosta is an independent yet frugal territory as the inhabitants have a limited but fascinating cuisine including some wonderful cheeses aged in the mountain caves. Guest enjoyed the best known of these, Fontina as well as the local style beef fillet in pastry.

FONDUE WITH CROSTINI
Fonduta with crostini

Cut Fontina in small squares and place in a bowl. Pour the milk into the bowl and let it rest for overnight, covered, in refrigerator. The next day remove half of the milk. In a pot melt the butter on low heat and put the cheese with the remaining milk in the pot mixing with a wooden spoon, and let it melt slowly. When the cheese and milk have become a smooth cream start to add the yolks, a little at a time, using the wooden spoon to help them incorporate. Serve in a plate with cracked pepper on top and slice of ciabatta on the side. Recipe for 4 people.

Season the duck legs with salt and pepper and seal them on a pan on medium flame until the skin is crisp and golden. Bring the stock to the boil in a pot and pour it into an ovenproof dish deep enough to submerge the duck legs. Cover tray and cook in a preheated 150C oven for 30 minutes. Remove tray from the oven and let them cool down on the kitchen bench. When cool enough to handle but still warm, pull legs out from the stock and tear the meat from the bones. Put the cooking stock in a pot and reduce it by 2/3. Heat olive oil in a pan and fry the pancetta until crisp. Add the pork mince and lightly fry until browned. In a bowl mix the cooked mince, duck meat, thyme, chestnut and 50 ml of the reduced cooking liquid. Place the mix into a small rectangular mould, cover with silicone paper and place a weight on top. Let it rest overnight in the fridge to set. Slice thick and serve. Recipe for 4 people

Season the fillet with salt and pepper and place it in a hot pan on high flame with olive oil until golden on all the side. Roll pastry into a rectangle big enough to wrap the fillet. Place the puff pastry on an oven tray and place half of the fontina in the middle of the puff pastry and do the same with half the ham. Put half of the sage on top of the prosciutto. Place the fillet on top of the sage. Put the sage on the other side of the fillet and do the same with the ham and then the fontina. Roll the pastry around fillet and close the sides. Rest in the fridge for an hour. Preheat the oven to 200C. Remove fillet from fridge and brush surface of pastry with the egg wash. Place in the oven and bake for 30 minutes. Remove from oven and rest in a warm place for 5-6 minutes before slicing and serving. Serves 6 as a main course. Recipe for 6 people

Using a potato peeler, peel strips off the lemon. Keep the strips aside. Juice the lemon and place in a bowl with 2 litres water. Peel and core apples. Cut them in half-moon slices about 5mm thick. Place apple pieces in lemon water. In a large pot that will fit all the apples comfortably, heat sugar, butter and spices together until sugar has completely melted. Add wine and lemon peels and stir well. Arrange apples neatly in the liquid and simmer until apples are tender but not overcooked or falling apart. This should take 20 minutes or so. Remove apples to a bowl and strain liquid, removing spices. Return liquid to pot and boil until it thickens. Turn down to a very low heat and add walnuts completely coating them with the toffee. Remove walnuts with a fork and place on greaseproof paper. Return apples and any juice they’ve given off to remaining toffee in pot, stirring through carefully. Serve apples warm or at room temperature with the toffee walnuts. Cream or ice cream if you must. Recipe for 6 people