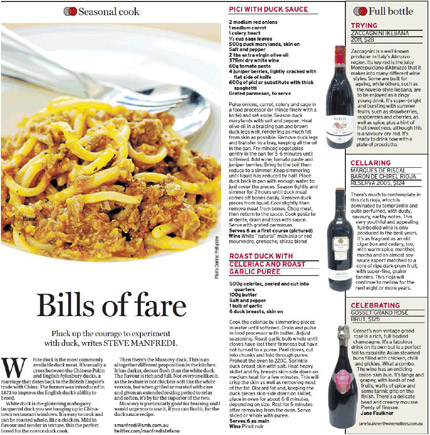 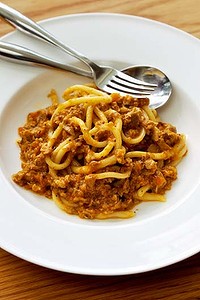 Pluck up the courage to experiment with duck.

White duck is the most commonly available duck meat. It’s usually a cross between the Chinese Pekin and English Aylesbury ducks, a marriage that dates back to the British Empire’s trade with China. The former was introduced in 1873 to improve the English duck’s ability to breed.

White duck is the glistening mahogany lacquered duck you see hanging up in Chinatown restaurant windows. It is easy to cook and can be roasted whole, like a chicken. Mild in flavour and tender in texture, this the perfect breed for the novice duck cook.

Then there’s the Muscovy duck. This is an altogether different proposition in the kitchen. It has darker, denser flesh than the white duck. The flavour is rich and full. Not everyone likes it, as the texture is not chicken-soft like the white version, but when grilled or roasted with care and given an extended resting period to relax and soften, it’s by far the superior of the two.

Muscovy is particularly good for braising and I would urge you to use it, if you can find it, for the duck sauce recipe.

Pulse onions, carrot, celery and sage in a food processor (or mince finely with a knife) and set aside. Season duck marylands with salt and pepper. Heat olive oil in a braising pan and brown duck legs well, rendering as much fat from skin as possible. Remove duck legs and transfer to a tray, keeping all the oil in the pan. Fry minced vegetables gently in the pan for 5-6 minutes until softened. Add wine, tomato paste and juniper berries. Bring to the boil then reduce to a simmer. Keep simmering until liquid has reduced by half. Place duck back in pan with enough water to just cover the pieces. Season lightly and simmer for 2 hours until duck meat comes off bones easily. Remove duck pieces from liquid. Cool slightly then remove meat from bones. Chop meat, then return to the sauce. Cook pasta to al dente, drain and toss with sauce. Serve with grated parmesan.

Serves 6 as a first course

Cook the celeriac by simmering pieces in water until softened. Drain and pulse in food processor with butter. Adjust seasoning. Roast garlic bulb whole until cloves have lost their firmness but have not turned to a puree. Peel cloves, cut into chunks and fold through puree. Preheat the oven to 220C. Sprinkle duck breast skin with salt. Heat heavy skillet and fry breasts skin-side down on medium heat for a few minutes. This will crisp the skin as well as removing most of the fat. Discard fat and, keeping the duck pieces skin-side down on skillet, place in oven for about 6-8 minutes, depending on size. Rest for 5 minutes after removing from the oven. Serve sliced or whole with puree.