The Fun In Fungi 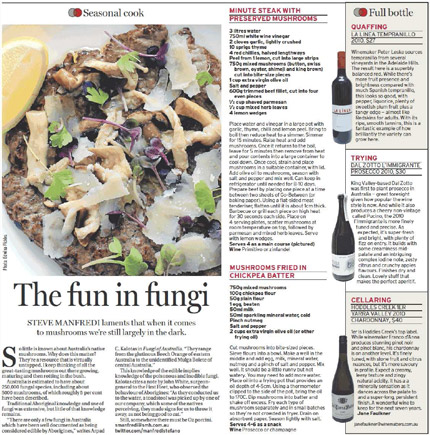 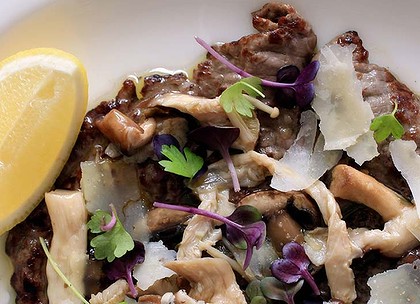 THE FUN IN FUNGI

Steve Manfredi laments that when it comes to mushrooms we’re still largely in the dark.

So little is known about Australia’s native mushrooms. Why does this matter? They’re a resource that is virtually untapped. I keep thinking of all the great-tasting mushrooms out there growing, maturing and then rotting in the bush.

Australia is estimated to have about 250,000 fungal species, including about 5000 mushrooms, of which roughly 5 per cent have been described.

Traditional Aboriginal knowledge and use of fungi was extensive, but little of that knowledge remains.

”There are only a few fungi in Australia which have been well documented as being considered edible by Aborigines,” writes Arpad C. Kalotas in Fungi of Australia. ”They range from the glutinous Beech Orange of eastern Australia to the unidentified Mulga Bolete of central Australia.”

This knowledge of the edible implies knowledge of the poisonous and inedible fungi. Kalotas cites a note by John White, surgeon-general to the First Fleet, who observed the behaviour of Aborigines: ”As they conducted us to the water, a toadstool was picked up by one of our company, which some of the natives perceiving, they made signs for us to throw it away, as not being good to eat.”

Still, somewhere there must be Oz porcini.

Place water and vinegar in a large pot with garlic, thyme, chilli and lemon peel. Bring to boil then reduce heat to a simmer. Simmer for 15 minutes. Raise heat and add mushrooms. Once it returns to the boil, leave for 5 minutes then remove from heat and pour contents into a large container to cool down. Once cool, strain and place mushrooms in a suitable container, with lid. Add olive oil to mushrooms, season with salt and pepper and mix well. Can keep in refrigerator until needed for 8-10 days. Prepare beef by placing one piece at a time between two sheets of Go-Between (or baking paper). Using a flat-sided meat tenderiser, flatten until it is about 1cm thick. Barbecue or grill each piece on high heat for 30 seconds each side. Place on 4 serving plates, scatter mushrooms at room temperature on top, followed by parmesan and mixed herb leaves. Serve with lemon wedges.

Serves 4 as a main course

Cut mushrooms into bite-sized pieces. Sieve flours into a bowl. Make a well in the middle and add egg, milk, mineral water, nutmeg and a pinch of salt and pepper. Mix well. It should be a little runny but not watery. You may need to add more water. Place oil into a frying pot that provides an oil depth of 4-5cm. Using a thermometer clipped to the side of the pot, bring the oil to 170C. Dip mushrooms into batter and shake off excess. Fry each type of mushroom separately and in small batches so they’re not crowded in fryer. Drain on absorbent paper. Season lightly with salt.